The symbols of Advent

A waiting path to Christmas, whose most recognizable symbol is the wreath illuminated by four candles. 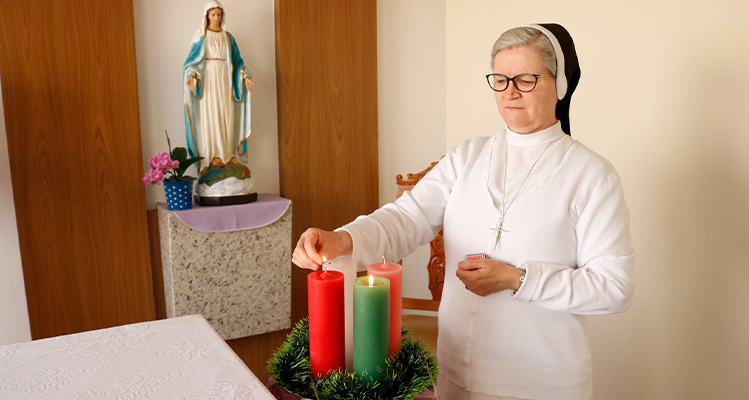 The Advent wreath is not an ancient custom. It seems to have first appeared among German Lutherans in the 16th century, but introduced even later, in 1839, by the Protestant pastor Johann Hinrich Wichern, who was one of the founders of the Home Mission, a pioneering movement in Germany concerned with urban pastoral care.

The first crown was a large wooden wheel with many more candles, twenty small ones for weekdays and four for Sundays. Later, this tradition typical of German Protestant churches was also adopted by Catholic churches. In the beginning, it was found only in ecclesiastical places, but with time it entered private residences all over the world.

The story goes that it was the children of the orphanage who suggested the idea to Pastor Wichern. The children continually asked him how many days were left until Christmas. And indeed, with its candles being lit each Sunday, the Advent wreath marks time, the days that pass. A traditional children's song much loved by German children explains this in a very simple and extremely effective way:

Symbols help man to decipher the mystery. The Advent wreath helps make visible the time of waiting and being together. Its circular shape refers to the beginning and the end, alpha and omega, understood within eternity and unity. A cycle that always returns and brings divine perfection. It is a symbol of the Lord's infinite love.

The branches of pine

At the height of winter, nature extinguishes its colors, but shines with its evergreen plants, which do not wither. So the wreath is made up of pine and fir branches to recall vitality and hope.

With the family gathered together, it is up to the youngest to light the candles. Today they are mostly red, a typical color for Christmas, but if one wanted to follow the liturgical season, the first two should be purple and the third pink, as in the vestments of priests. White is the eventual and less widespread fifth candle for Christmas Day. Purple recalls the original and deeper meaning of Advent, which originally was preparation for Christmas through fasting and penance, while pink alludes to joy and white to the absolute purity of Jesus, the light of the world.

Announcement on the election of Mother General